How Does Public Transportation in Germany Work?

Germany’s public transport system is famous for its efficiency and quality, and rightly so. But it can still seem like an absolute riddle to foreigners!

We’re here to guide you through and demystify the way public transportation in Germany is structured and operated. 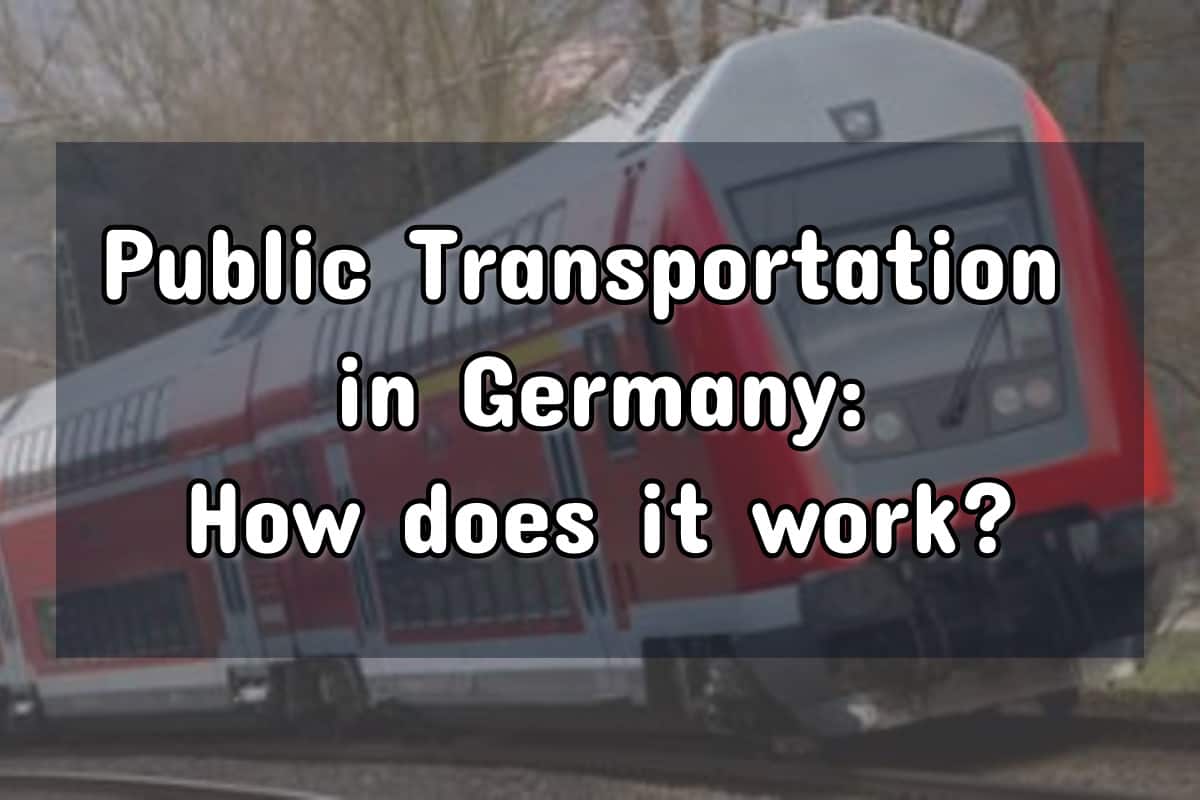 How does public transportation in Germany work?

Germany’s efficient public transit network integrates trains, buses and trams under a zoning system: Your ticket within a given travel zone (Waben), can be used across numerous forms of transport, as they all work together in the same network.

To understand the public transport system, we’ll first need a quick crash course in the concept of travel zones.

Central to the system and one of the first things to get your head around is the Waben, or zoning which is the foundation upon which ticket charges are based.

The whole system is integrated, meaning that each transit company operates within an alliance (or Verkehrsverbund in German).

They each offer and accept the same types of tickets across the network. So the ticket you buy on a city bus is therefore also valid for completing your journey on a tram or underground train.

IMPORTANT: This only true as long as you remain within the zone for which the ticket is valid. The maps of the transit system at bus and tram stops and train stations will display the zones and each station within them.

When you buy a single ticket, it is typically valid for a 60 or 90 minute period and you are free to use any type of public transport available within the network to complete your journey.

Each area of Germany is represented by a Verkehrsverbund. Within each of these integrated public transit alliances, buses, trams and trains all operate within the network, often through different companies or municipal networks, all working under the same tariff rules, governed by the alliance.

The Verkehrsverbunde covering the major metropolitan areas are linked to below. Where they have an English web page, I have linked to this.

However, in almost all cases the German site is more comprehensive and contains much more information. Just click to German on the page if you can’t find what you’re looking for.

How to buy a ticket

Automated ticket machines can be found at major bus stops / intersections and at all tram, U-Bahn and S-Bahn stations. These usually have instructions English, as well as sometimes other languages. Paying by (German) debit card is usually possible.

Some German public transport ticket machines will not take credit cards or contactless payments, although this is gradually changing.

Luckily, most of the Verkehrsverbunde also have downloadable apps. These enable electronic ticket purchases online which are then debited at the end of each month. Tickets are also cached in the app as proof that you have a valid ticket in case an inspector boards your train.

Great if you live there, but not so practical if you’re just visiting.

Ticket machines will take cash up to €20 notes but will only give you change in coins. Often 1, 2 and 5 cent coins are not accepted.

Depending on the Verkehrsverbund, some of the tickets will require a validation before, or upon, boarding a bus, tram or train. There’s no hard and fast rule for this and it’s regulated by the individual transport authorities. It can also be dependent upon where you purchase your ticket.

The best advice here is if in doubt, ask. You’ll usually be able to find somebody in the ticket office who speaks English, at least if you’re at a train station.

Usually only valid for 3 or 4 stops on a bus or tram. Not valid on the S-Bahn or U-Bahn.

Single ticket valid for a set time period, in most cases 90 minutes. Unlimited transfers are permitted within this time as long as you stay within the zone(s) for which the ticket is valid. Check the network map to be sure of the zones in question.

This ticket is valid for either the day in question, or a 24 hour period, depending on the network. It usually states this on the ticket (Tageskarte or 24-Stunden-Karte).

Some day tickets are also valid for services which run until the early hours of the next morning, to ensure that night owls can get home from an evening out without having to purchase a new ticket.

Same as the day ticket, but valid for 7 days.

For tickets with a longer validity than a week, you generally need to show ID and purchase these from an official ticket office. These are not transferable and the public transport operators do this to prevent fraud, with multiple people sharing the same ticket.

Group day ticket which is valid for up to 5 people travelling together. Otherwise these are largely similar to day tickets. These tickets often represent great value for money if you’re travelling in groups of 3 or more.

The network of public transportation in Germany runs on an honesty principle, meaning that there are no station barriers as are commonly found in other countries, for example on the London Underground and Paris Metro.

There is nothing physically stopping you from boarding a bus, tram or train without a valid ticket (although buses may only allow passengers through the front door, and the driver may ask you to show a ticket upon boarding).

Getting caught is not much fun though.

The term for being caught without a valid ticket is Schwarzfahren and it usually comes with a €60 fine.

If you are unable to pay this to a ticket inspector on the spot, you will have to show ID and give your address, and you will receive a summons if you rather stupidly decide to ignore the fine.

Buses are the mainstay of public transportation in Germany once you get out into more rural areas, often being the only link between 2 towns. In the major urban areas, buses cover the less busy routes which are not on the tram or U-Bahn (underground) network.

Bus routes within a city will have stops approximately every 300 metres. Bus (and tram) stops are signified by signs with a green circle with the letter H, which stands for Haltestelle, literally translated: stopping point.

Trams are kind of a mix between a bus and a U-Bahn.

They carry a higher volume of passengers, the stops are typically a bit less frequent than for buses (approximately every 500 metres) and obviously they run on rails. Trams run on tracks but often share the street with regular traffic, thus progress is at a similar pace as buses and more prone to delays than a U-Bahn.

Some of the newer tram lines run on separate lines away from traffic, making them more similar to U-Bahn trains.

The name U-Bahn is a German abbreviation for Untergrundbahn, and is what Brits would call the Tube and Americans the Subway.

In reality, many U-Bahn lines actually run above ground once you get outside of the inner city. In that regard, there is little which separates them in terms of functionality from trams running on purposely built tracks.

The stopping frequency is similar, at about every 500 metres, although this becomes less frequent as the U-Bahn radiates out of town.

Often a U-Bahn line will run to further flung suburbs than a tram does, in many cases going beyond the city limit, albeit not as far out as an S-Bahn line.

The S-Bahn is an abbreviation for Schnellbahn and is a faster suburban rail service, primarily aimed at commuters and residents of satellite towns and suburbs on the edge of major urban areas.

S-Bahn trains run on the federal rail network belonging to Deutsche Bahn and routes typically run up to about 50km outside of an urban core, which is usually centred around the main train station (German: Hauptbahnhof).

The S-Bahn Rhein-Main, for example, radiates out of Frankfurt Hauptbahnhof and the stations within the central loop of the Frankfurt rail system. All S-Bahn services passing through the centre of the city serve these stations and the network branches out from here. The lines then run to key towns elsewhere within the Rhein-Main metropolitan region.

S-Bahn trains also have dedicated sections for bikes, usually in the front or rear carriage. Although, during peak commuter times these areas are often taken up by passengers.

If you’re planning to commute to work by bike with the help of the S-Bahn, I’d recommend you first do a dummy run to make sure it’s viable.

This is not necessarily the case though; especially away from the major urban centres, where the RB also covers much shorter distances.

These routes can also be operated by private franchises, in which case they might not be described as RB or RE services on timetables and departure boards.

The private operators use their own descriptions for the services but for all intent and purpose they are operating a RB or RE service under a private franchise.

Trains may be a different colour than the ubiquitous Deutsche Bahn red – but your ticket will still be valid. Ticketing rules and regulations, as well as any Deutsche Bahn-issued day tickets or flat rate tickets are all valid on these services.

Long-distance (intercity) travel is a separate topic in itself.

Here, I can highly recommend this post by California Globetrotter which gives a fantastic, clear explanation of how intercity train travel in Germany works.

Trying it out is the only way to get comfortable…

Public transportation in Germany is a great way to get around. In most cities, a car is unnecessary. It just takes a while getting used to how it works and some of its nuances.

Figuring it out may take a few journeys – but it really isn’t that complex, once you’ve read our guide and taken your first bus or train ride!